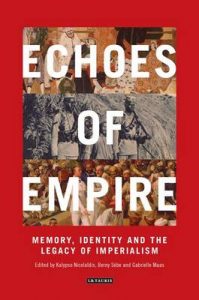 How does our colonial past echo through today’s global politics? How have former empire-builders sought vindication or atonement, and formerly colonized states reversal or retribution? This groundbreaking book presents a panoramic view of attitudes to empires past and present, seen not only through the hard politics of international power structures but also through the nuances of memory, historiography and national and minority cultural identities. Bringing together leading historians, political scientists and international relations scholars from across the globe, Echoes of Empire emphasizes Europe’s colonial legacy whilst also highlighting the importance of non-European power centres – Ottoman, Russian, Chinese, Japanese – in shaping world politics, then and now. Echoes of Empire bridges the divide between disciplines to trace the global routes travelled by objects, ideas and people and forms a radically different notion of the term ‘empire’ itself. This will be an essential companion to courses on international relations and imperial history as well as a fascinating read for anyone interested in Western hegemony, North- South relations, global power shifts and the longue durée.

‘This collection of scholarly essays offers the most wide-ranging and impressive effort to date to analyse the after-life of modern European empires. Legacies of colonial rule, the volume shows, continue to play a structuring role in composing the world we think of as post-colonial and global. The far-reaching conclusions of this book will interest all students of the contemporary world.’ Dipesh Chakrabarty

‘An original and illuminating collection of essays, Echoes of Empire invites and even compels us to interrogate Europe’s contemporary preaching to the rest of the world in the light of its own colonial past.’ Timothy Garton Ash

‘Echoes of Empire is an impressive intellectual achievement. This is a book for scholars of all disciplines; to scholars of International Relations (IR), it is an especially humbling reminder of how little the field has done to come to terms with the legacy of colonialism. But the book is also an inspiration to those who want to end the West versus the Rest divide and build a truly inclusive field of Global IR or global social sciences.’ Amitav Acharya

‘This unique volume unveils for the first time the deep link between Europe’s colonial past and current European and global politics: a compulsory read for anyone interested in the role European countries may be able to play in a global world.’ Rebekka Habermas

‘The leitmotif of the volume is to reject the idea that we can ever be free (at least in the foreseeable future) of the effects of empire. This is not to retreat into post- colonial angst (or rage), but to acknowledge that the world we live in was so largely made by empires (and not just those of Europeans), that to deny their influence is merely futile.’ John Darwin